“Sky Harbor ranked as the 10th largest megahub in the world, No. 8 in North America and No. 5 among airports with a cluster of flights from low-cost airlines like Southwest, according to a study by air-travel research firm OAG.

Megahubs are airports with the highest ratios of scheduled flight connections to the number of destinations served by the airport. The top three in the world, according to OAG: Atlanta’s Hartsfield-Jackson International Airport, Chicago O’Hare and Dallas-Fort Worth International.

Sky Harbor is a major hub for two airlines, American/US Airways and Southwest. Both funnel passengers through Phoenix on their way to their final destinations.”

Why is this important to us? It means that our advertisers reach not only Phoenix destination flyers, but also hubbing passengers, who are often business travelers and higher demo/decision makers.

With Super Bowl XLIX less than 2 weeks away, the whole city of Phoenix is buzzing. Transit, billboards, and downtown show signs of the big game coming February 1st, but the first place travelers will see all the hype is at Phoenix Sky Harbor airport! You’ll spot big names like Pepsi in all terminals with messages promoting their halftime show and NFL branding in bag claim, concourses, and the Rental Car Center. Budweiser, Disney, and LifeLock are also present in a big way with custom floor mats, banners, backlit signs, and digital!

Of course the Super Bowl is a huge event for the valley, and there will also be big crowds for the Phoenix Open Golf Tournament. And in just a few short weeks Spring Training will begin for MLB. It’s a great time to be in the Valley of the Sun! 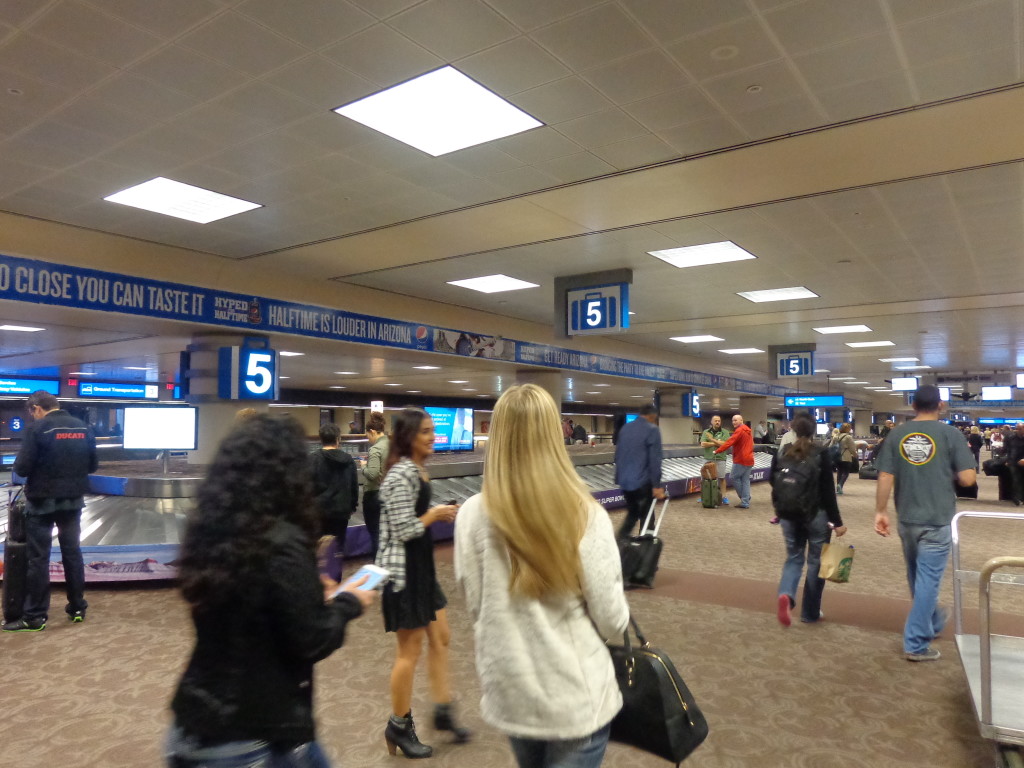 Phoenix Sky Harbor has been in the process of revamping the food concession program and they’ve brought in great local fare to please each traveler’s palette. In October additional restaurants opened on level 3 in Terminal 4 including Smashburger, Yogurtology, and America’s Taco Shop. These restaurants join other local favorites already operating in Terminal 4 including Chelsea’s Kitchen, Sauce, Joe’s Real BBQ, and Lo-Lo’s Chicken and Waffles. And that’s before security! While waiting for your flight you can also enjoy Four Peaks, Blanco, and La Grande Orange, to name a few. Get a full list of restaurants offered at Sky Harbor along with locations from the airport website HERE or grab the green “Airport Information” brochure while at the airport. Happy eating!

The Super Bowl Countdown is On!

With 179 days and counting until Super Bowl XLIX, the Arizona Super Bowl Host Committee and Phoenix Mayor Greg Stanton today unveiled a countdown clock at Phoenix Sky Harbor International Airport which will mark the days, hours, and minutes until the opening kick‐off of the State’s third Super Bowl since 1996! The clock is on a 55″ HD LCD monitor, visible on the :30 second escalator ride from the Passenger Level in Terminal 4 down to Baggage Claim on both the East and West ends of the terminal.

The 49th Super Bowl is estimated to have a $500M economic impact on the state of Arizona and will draw an estimated 90,000 visitors to the Valley of the Sun for the big game. Other events like the Waste Management Phoenix Open, Pro Bowl, and Barrett-Jackson Car Auction, and many more will draw additional visitors to the state in early 2015. Get all the latest news on Super Bowl XLIX from Twitter and Facebook by following the Host Committee @AZSuperBowl #SuperBowl #AZSuperBowl #SB49.